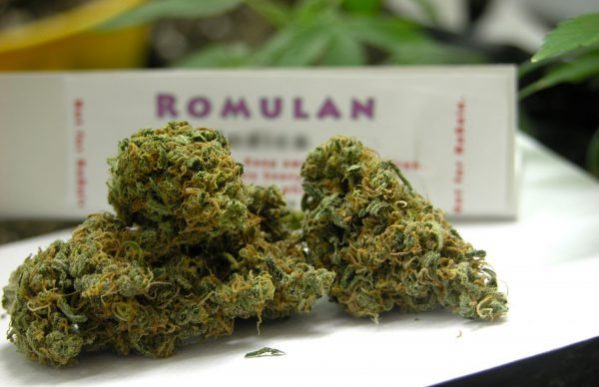 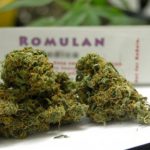 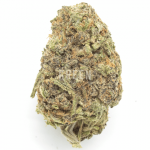 Romulan is a legendary Indica-dominant strain that got its name when people began joking that this strain could “dent your head” and create ridges like the warrior race from Star Trek that shares the strain’s name.

Having been featured in Skunk, High Times, and Cannabis Culture, Romulan is well known for its potent narcotic-like stone. Users often find themselves glued to one spot and may be overcome by a sleepy-laziness.

This strain also wraps the user in a euphoric blanket of bliss while also stimulating the appetite. Snacks should be kept close as the “munchies effect” of Romulan is very strong even for experienced users. Everyone expects the cotton mouth and dry eyes but users might get caught off guard by the possible dizziness, paranoia and headaches when consuming Romulan in high doses or when baking it into edibles.

This strain is most often chosen by those dealing with insomnia and as such should not be used during the day.  Users seeking pain relief often find that Romulan may relieve even some of the worst chronic aches and pains. Others choose it to alleviate the effects of stress and anxiety disorders, depression and various stomach problems.

Romulan’s exact origins and lineage are unknown, it was bought in 1996 by Federation Seeds as a completed strain. Federation Seeds was attempting to rescue the strain from dying out and received Romulan as clones. This made her entirely female and Federation crossed the strain with the award winning White Rhino. After this, the breeders then back-crossed the strain many times until only three percent of the White Rhino remained in the strain’s genetics. Romulan flowers for about 55 to 60 days and branches multiple times with many budding sites. This makes the strain less than ideal for techniques like the Sea of Green.

Iron the Klingon creases of worry from your forehead with the relaxing and sedative Romulan Kush. Deriving from a Romulan male and a Master Kush female, the densely knotted flower clusters of Romulan Kush have an unmistakable pungency comprised of organic earth and spice aromas. An intensely effective strain, it is very calming and recreationally narcoleptic. Ideal for those with high tolerances.

Ideal for sea of green (SOG) indoors, it is ready at the 55 day mark. Outdoors, the overt resin production makes this strain very pathogen-resistant. Broad and heavily structured plants are ready by early to mid-October. Growers will enjoy watching the sugar leaves get twisted out of shape as the thick flowers fight for room.

Be the first to review “Romulan kush” Cancel reply